I love Pilot Parallel pens, but a couple of things about them really annoy me. One is that you cannot post the cap of the pen, so once you take the cap off, there's nowhere to put it if you're not sitting at a desk. The second thing is that they are so long that they don't fit in all of my pen cases. The fact that they don't have a pen clip on them, combined with the length, has caused them to slip right out of my sketch bag more than once.

I've been noticing for a long time now that there is an indented circle around the barrel of the pen. I've often wondered what would happen if I cut the pen there to shorten it, and close up the resulting opening. This morning I decided to test drive that idea. 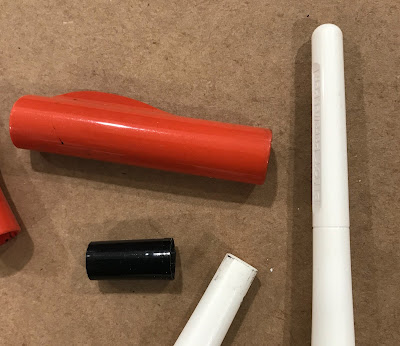 In the image above, you can see the indentation around the barrel on the pen on the right. I cut the barrel there, as shown on the pen with the flat edge to the left of it. Once the end was wider because it had been cut, I wondered if the orange cap would now post onto the barrel.

To my surprise and amazement, not only did the cap fit perfectly onto the cut end, but when I removed the cap, that black plug that you see (which comes lodged inside the Parallel pen caps) became an end cap, and was affixed to the end of my pen barrel! Apparently, the pen is designed with this option to shorten it and also be able to post the cap! 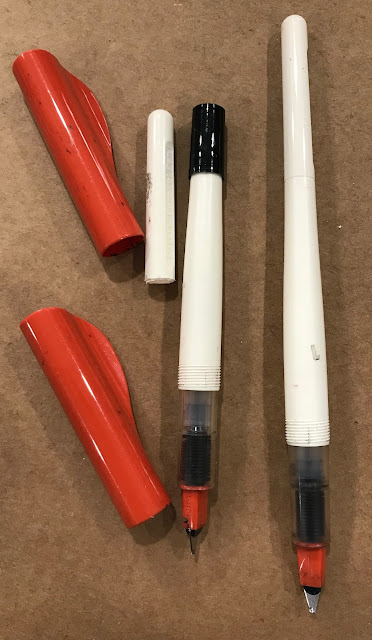 You can see in the image above how the black end cap fits perfectly on the end of the barrel. I'm going to put a little glue in there to make it a permanent and secure addition. The pen must have been designed for this; otherwise the black plug wouldn't be there, or wouldn't fit and automatically affix itself the the cut end, and neither would that indented circle around the barrel exist which indicates where to make the cut. They should include instructions for it in the leaflet that comes with the pen!

I have now done this to 13 of my Parallel Pens. On two of them, the black plastic end cap didn't come out of the colored cap to attach itself to the barrel. I just put a drop of Crazy Glue around the cut end, reinserted that into the cap, and the end cap affixed itself perfectly.

If you like the length of the unaltered Parallel and don't mind that the cap doesn't post, don't do this hack! It does shorten the length of the pen considerably. Hopefully it will help some of you who have also want a shorter pen with a cap that posts. One of my favorite pens just got a whole lot better!

Posted by Jamie Williams Grossman at 11:41 AM