Breaking in Your Stillman and Birn Alpha, Gamma or Epsilon Hardbound Sketchbook So It Lies Flat

For all of you kindred spirits who share my infatuation with Stillman & Birn Alpha, Gamma or Epsilon  hardbound sketchbooks, I have some great information to share with you! I was talking on the phone last week with Stillman and Birn co-owner Michael Kalman, and he told me that their hardbound books have been designed to open completely flat, and they have a flexible binding! Yep, that's right!

In order to achieve this, you have to break in the book before you use it by opening to the center of the book and bending the pages and covers back 360 degrees so they touch. Then go through the book and do that throughout the book, gently bending the pages and covers back.  I know you're thinking the whole book will fall apart. That's what I thought, and I would never in a million years have done it if he hadn't told me. But when I got off the phone with him, I went straight to the new S&B sketchbook I was about to start, and did exactly what he said. My husband walked in and was horrified --- he thought I was destroying the book until I explained it to him.

After bending the pages and covers gently all the way back from the middle of the book, I did the same thing from the center of each signature (where the stitching is). Then I again started from the middle, working toward the front, opening every page spread that way; then I did the same from the middle toward the back. Don't use every ounce of brute strength that you have, because if you try hard enough to pull the book apart, you will probably be able to do that!  When I was finished going through the whole book twice like that, every single page spread laid down flat. No deep gutters to cross! It was a miracle. I am sooooo excited about this! It works. Try it.

The reason why you want to do this before working in an S&B book is because if you paint across the two page spreads like I do, adding that flexibility to the binding reveals more of the white paper in the gutter area. If I were to do it to my almost-completed Alpha book, I'd have a white vertical stripe down the center of nearly every painting I've done in that book. I have noticed while working through the book that as it has broken in a little bit by itself, some of that white in the middle has been revealed on some of the page spreads. Not only will the books lie much flatter by breaking them in ahead of time, but it will also stop those white center areas from appearing later on as the binding gives with use.

The S&B hardbound books apparently have a triple binding process that involves three different types of adhesion. It is this triple process that enables them to undergo bending the binding and page spreads back that way without damage to the spine, and keeping all the pages intact. This is such wonderful news for those of us who work across the two-page spreads; I had to share!
Posted by Jamie Williams Grossman at 7:42 PM 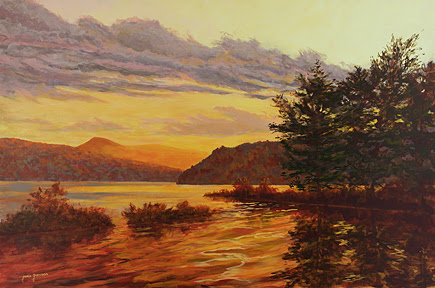